David Buskin and Robin Batteau are two of the most talented musicians I know.  But you need to know this about them—they are seldom very serious when interviewed.  They get their sillies on so bear in mind that tongues are stuck firmly in cheeks here.

Take a listen to B&B’s new CD Love Remembered, Love Forgot.  Despite what the musicians say below, trust me.  It’s a darn good CD.  Plenty of guest musicians are involved in this recording:  Tom Rush, Jonathan Brooke, Krista Detor, Pat Wictor, Trina Hamlin, Eric Schwartz, Yani Batteau and Sophie Buskin. Add a fabulous rhythm section of B&B percussionist extraordinaire, Marshal Rosenberg as well as Jeff St. Pierre on bass, Kevin Barry on various guitars and Corey Schreppel on drums and you’ve got so much talent pressed into those grooves that it’s insane!

Buskin, Batteau and the aforementioned Rosenberg will be appearing at the me&thee on October 12.

For more information about Buskin & Batteau, go to their website. 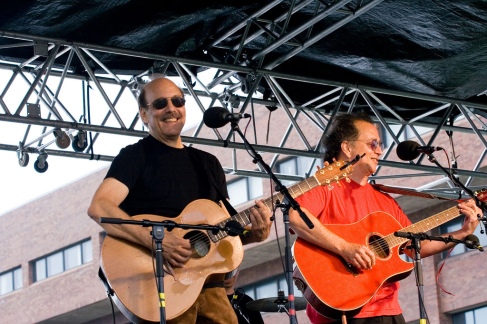 Robin: Right. All the mistakes.

It was fun to watch and hear about the progress of this CD via producer Neale Eckstein’s exquisite photos, videos, and brilliant witticisms on Facebook.  It sounds like it was a lot of fun—especially bringing old friend, Tom Rush, in to sing on “One Month Crazier Than You.”

Robin: Tom kept bugging us for years about being allowed to appear on an album.  We finally caved, just to get him to quit it, and because Neale – plus Annie Wenz – wrote such a great song, Tom didn’t completely ruin the record for once.

David: Neale?  Brilliant witticisms? Once he said something mildly amusing, and he’s been coasting on it every since.

Also because of the wonders of Facebook, your fans were all pretty tickled with the song by song critique by another friend of yours, Christine Lavin.  Care to tell everyone about that tale from Kerrville through the CD getting popped into Christine’s CD player.  😉

Robin: Neale gave it to Chris at Kerrville, and she said “Huh,” or something equally witty.  Popped it in her bag and thought nothing more of it, nor did she even know what it was, until she put it on at random after a bunch of other Kerrville detritus.  The rest is Facebook history.

The New York Times has called you “the most musically sophisticated act in folk.”  That’s some compliment.  So did you duke it out as to who was the most sophisticated in the band and did Marshal come in as number 1?  And do you suppose they’ve heard “Jews Don’t Camp?”  😉

Robin: Unaccustomed as I am to responding to intimations via the hoi polloi, I feel it is nonetheless incumbent upon me to defer to Immanuel Kant, who once said to Werner Heisenberg, “I didn’t park the car, (expletive deleted), you parked the car.”

David: Marshal?  Sophisticated?  I mean it’s okay to eat with your hands sometimes, but soup?

You’ve got a radio show on WPKN in Bridgeport, CT.  It’s fun listening to you because you never know what you’ll play or what you’ll say next but what I like the most is that you make a real concerted effort to recognize the folk community—musicians, presenters, and fans.  We’re all in this together.  Do you find doing this show a rewarding experience?

David: You betcha. It’s like being a kid coming home from the record store and getting your friends to listen to what you bought. “You gotta hear this!”

You’ve both had your songs covered by a crazy, wild eclectic group of musicians like Judy Collins, Whitney Houston, Johnny Mathis, Astrud Gilberto, Peter, Paul & Mary, Pat Benatar and even Paul Newman.  Wow!  You have some impressive bullet points on your resumes, that’s for sure.   But have you both shared one of those “wow….this is too great for words” moments together?

Robin: Watching Whitney Houston and Pat Benatar mud wrestle over who would get to sing “Here Comes Mr. Chicken” pretty much made our careers.  And then the two of them trading licks on lines like “Ain’t no cocky dude’ll do ya like this cocky dude’ll do heaven.”

David:  It’s pretty cool when someone else sings your song, but it’s really cool backing up other singers. Playing with Stevie Goodman on “City of New Orleans” or Jennifer Warnes on “Bernadette” or Krista Detor on “Clock of the World” were wow moments. Singing the Dave Lambert part on “Come On Home” with Jon Hendricks and his daughter was up there too.  Not to mention singing to Carole King, “But Will You Pay Us Tomorrow?”