Sharon Goldman is one of the musicians who make up Chicks with Dip—a talented bunch of women who have been touring with their tribute to Joni Mitchell’s Blue album.  Sharon’s songs are honest and direct, guided by an impeccable voice that draws you in at the first note.

When did you first realize you had the singer-songwriter bug?  And how did you act upon that dream?

I realized I had the singer-songwriter bug — or at least the dream of it — in the late ’80s and early ’90s when artists such as Suzanne Vega, Shawn Colvin and the Indigo Girls came on the scene. While Joni Mitchell and others had already paved the way, seeing these artists on MTV and listening to them on the radio were my generation (X)’s entree into feeling like a young woman could express herself through songwriting and performing as a solo, acoustic artist. I remember seeing Suzanne Vega play solo at my college, George Washington University; in 1986…it was awe-inspiring for me to see a woman alone on stage with such power. In terms of acting upon that dream, however, that took a lot longer. Perhaps it was that I felt that as a girl growing up in an Orthodox Jewish family, I didn’t have a lot of models for going out and doing that sort of thing — in fact, I never even sang solo in public until 1999, when I found out about the local open mike scene in New York City, and that gave me a way to give my singer-songwriter dream a try.

Do you recall the first song you ever wrote?  And what inspired you to write it?

I really don’t remember the very first song I wrote — there were a few from the early-to-mid ’90s that never made it into those open mikes I mentioned above, that I wrote when I was still just singing in the shower and in my locked bedroom. However, I remember the first song I ever performed at an open mike that I had written…it was called “Strange Days” and was a simple song in the key of C that was really just a stream of consciousness kind of thing. I do remember a songwriter friend of mine being impressed that this was one of the first songs I had ever written, so that inspired me to keep going. I wrote it on the piano, because that was the only instrument I knew how to play at the time. I didn’t learn how to play the guitar well enough to perform onstage until months later (I knew how to play but very little), when I realized I needed a portable instrument if I was going to go to open mikes that didn’t have a piano or keyboard.

You’re involved with Chicks with Dip who celebrate Joni Mitchell’s Blue album.  What is your opinion of Joni Mitchell as an artist?

Joni Mitchell is one of those artists that is so genius-like in a lot of ways that it can be incredibly intimidating. Why bother writing a love song when “A Case of You” has already been written? On the other hand, she is also really inspiring, not just in her writing and composing skills but in her openness and vulnerability — that’s something I always aspire to because those are the qualities that really move an audience.

Do you recall the first time you heard Blue?

I first heard Blue in 1991, when I was spending a year and a half abroad in Israel. I was living in Jerusalem with my friend Julie, who had grown up with a folk music-loving Mom in New York City. She gave me her copies of Ladies of the Canyon and Blue to listen to and those two albums were part of the soundtrack of that time in my life.

Did your time abroad in Israel influence your musical life at all? Tell us about your time there.  I’m sure it was life-changing.

It certainly did influence my musical life, in that I certainly heard new music from a variety of new friends — including being introduced to Joni Mitchell, as I mentioned above. But I also remember listening to a tremendous amount of Israeli popular music at the time, which I didn’t really know existed. I spent six months in a language immersion program in the Negev, a desert region in southern Israel, in a teeny-tiny town called Arad. Most of the time Arad is a super-sleepy place, but once a year it comes alive with a three-day Woodstock-like music festival where all sorts of young hippie kids come and sleep in the streets and music plays all night long. That was an amazing musical moment for me, to see all of these Jewish kids grooving and playing and listening; and I was really inspired by one big performance I went to, where a bunch of us got up at 3 a.m., piled onto a bus and were driven to the foot of Masada, where we saw one of Israel’s top artists, singer-songwriter Yehudit Ravitz, sing her beautiful songs as the sun rose over the cliffs and the desert and the Dead Sea. It was amazing! 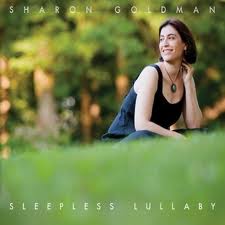 Do you have any advice for any aspiring singer-songwriters?

I would say just keep practicing, keep listening and get out to open mikes to start performing. In my early days, I probably went to 3-4 open mikes a week; it was a tremendous learning curve to get on stage but invaluable. Also, find your local singer-songwriter community — there is one in nearly every city and big town. It’s incredibly helpful to have support and feedback, just like I’ve gotten from the Chicks with Dip over the past decade.

To learn more about Sharon Goldman, visit her website.