How can you not think you’ll be hearing something extra special with a band named Cricket Tell the Weather?  They’re a whole lotta bluegrass and a whole lotta fun.  They’re playing all over New England this summer and have been chosen as Emerging Artists at this year’s Falcon Ridge Folk Festival in Hillsdale, New York. They’ll be on the main stage on August 2.

You can sample some of their music on their website.

Here’s a video of them playing “Rocky Mountain Skies.”

I’ve got to ask—where did the band name Cricket Tell the Weather come from?

With bluegrass bands you get a lot of “ramblers” and “boys”….”mountain” and “railroad”. We wanted something that could branch out a bit. The name was taken from a piece of experimental theater where the main character goes mad during an old-time hoedown, and yells out “Cricket tell the Weather!”

Was the genesis of the band created when Andrea and Jason co-wrote a song for the Podunk Bluegrass Songwriting Competition?

The band is an extension of a band Andrea and Jason formed in Syracuse called Atlantic Flyway. For cricket, we found new players and started playing mostly original material. Winning the podunk songwriting competition really helped jump-start it.

How did the band form?  Tell us about all the members

Andrea and Jason had met in Syracuse, NY. It all started on Craigslist! Jason was playing in a Syracuse bluegrass band and Andrea responded to an ad they posted looking for a fiddler. After playing in Syracuse together for two years, Andrea moved to CT and Jason moved downstate and they began writing original material. Andrea met banjo player Doug Goldstein at Joe Val bluegrass festival in 2012 and recruited Connecticut native Dan Tressler on mandolin later that year. We found Hans Bilger playing bass at a campfire jam at the Greyfox bluegrass festival, and within a few months the band started hosting a monthly jam at the Outerspace in Hamden, Connecticut.

Your music is described as progressive bluegrass,  What makes it progressive?

“Progressive bluegrass” is sort of a catch-all phrase for stringbands that venture outside of the traditional bluegrass sound, and some of the songs we write are informed more from rock, pop, and jazz. We love traditional bluegrass, but we also grew up listening to and studying other kinds of music. To us, it’s fun to try to bring in elements from other genres into an acoustic string band setting.

There’s a video of you playing with Rushad Eggleston.  How did that gig come about?  Did you know Rushad?

Rushad’s work in Crooked Still and as a solo artist has been hugely influential to us, and we have been fans for a long time. The wonderful thing about the bluegrass and acoustic music scene is that you can meet your heroes and get to know them. That particular show was put on by some mutual friends, and we jumped at the chance to open for Rushad. It was really fun to watch him work a crowd of octogenarians, and everyone had a blast. 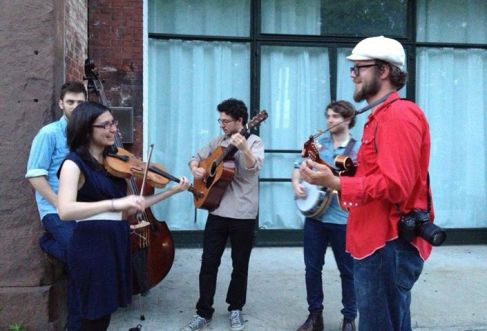 What’s the latest about your forthcoming debut CD?

We’ve been writing material for the album over the past two years and now that we’ve selected the nine originals we want to include, we’re arranging the tunes as a full band. We’ll be doing a kickstarter campaign in August to raise funding for recording and pressing costs, and begin recording in September. The album is set to be released in December 2013.