A cappella music means singing without instrumental accompaniment.  The voice is the instrument.  I bet you didn’t know that the expression actually means “In chapel style’” in Italian.  Many hundreds of years ago music was composed solely for use in chapels and was for voices only as opposed to music that was composed for large churches or cathedrals that often had huge organs.

There has been a resurgence of a cappella singing at high schools and colleges for some time now.  Many schools have not just one a cappella but several—some are mixed and some are male or female.  Five O’Clock Shadow has made a name for themselves as one of the most exciting and experimental groups in the a cappella world.

To find out more about FOCS, check out their website.  Thanks to Caleb Whelden for answering these questions.

Here are some video highlights from Five O’Clock Shadow.

Five O’Clock Shadow has been a prime mover and shaker in the a cappella music world for quite some time.  What are the characteristics that make this group so unique?

Five O’Clock Shadow (FOCS) has been a pioneer in the usage of guitar and synth effects in live performance.  Just like an acoustic guitar plugs in and becomes electric, our microphones get “plugged in” to transition from “acoustic voice” to “electric voice.”  Groups from both the college and professional level have used them on albums before, but there are hardly any groups that transfer that sound to their live act.  We still, however strive to maintain a high level of musicality in our shows.

There have been many iterations of Five O’Clock Shadow.  How does the repertoire change when new singers join the band?

Each time we replace a member in the group, we have to go through a transitional “identity crisis” period.  During this time, we’ll still perform the music we’ve had in our repertoire, but we need to rethink the style of new music a bit.  Just like any group, each member adds a bit of his own personality to the performance.  It is important to recognize that and instead of trying to make that person fit the mold, we shape the group in a slightly new direction.

Have all the current singers in the group been singing a cappella since they were in high school or college?

All of us sang a cappella in college.  Before that, our experiences with a cappella, or singing in general, changes.  For instance, because of the wide age range, for some of us a cappella didin’t really exist as we know it in high school.  In fact, only two of us sang in “a cappella” groups.  For the others, one didn’t even begin singing until he was a senior in high school, one was a child “star” of sorts and sang in commercials, and the others began singing in either high school choir or church choir.

How much of an impact do you think that the TV series, The Sing Off has had on popularizing a cappella music?

Because of The Sing Off and to a major extent, the movie Pitch Perfect, a cappella singing has skyrocketed in popularity.  It’s great to see for guys like us who have been singing professionally for anywhere from 10-25 years.  Pentatonix, who gained its fame from The Sing Off is actually approaching becoming main stream with their music.  Their albums are always at the top of the download charts when they are released.  I think I can speak for all of us when I say I can’t wait to see where we are headed next. 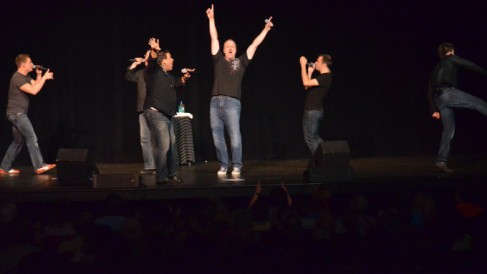 What is the most challenging aspect of arranging and singing an a cappella song?

The most challenging aspect is making the song interesting and unique.  It’s one thing to transcribe a song to make it fit for voices, it’s another thing to actually come up with a new idea and presenting it with voices.  It’s something I know we’ve been really focusing on for the past few years.  When the group first started, just being able to present a song with voices was enough.  Now that most everyone out there has heard a cappella, we’ve found that just transcribing a song isn’t enough for audiences to remain interested.

What are the most important musical skills that an aspiring a cappella singer should possess (other than a good voice, of course!)?

I think the most important skill for a cappella singers to have is being able to listen.  Just because you have a gorgeous voice doesn’t mean you will always be the front-person of the group.  There’s a time to step forward and showcase and there’s a time to sit back and create a group sound with the others.  We teach a workshop on “building group sound” at every festival we attend because we know the importance of that aspect of our art form.