It’s always interesting to get the list of Falcon Ridge Emerging Artists and to look for the names of those artists who you have already seen, those who you’ve heard of before but never seen and those you seem to crop out of nowhere and demand to be heard.  Libby Koch was one of those names for me.  I’m glad I got to hear her authentic music, rooted for generations in the deep, dusty Texan soil.

Enjoy finding out more about Libby on her website.

Here’s a video of Libby singing her song “The Other Side.” 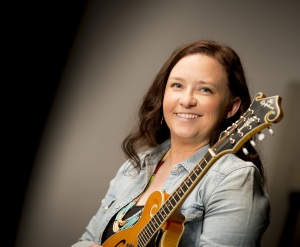 You’re a seventh-generation Texan.  How did your family end up in such a tiny town as Tennessee Colony?

My mother’s side of the family settled in Tennessee Colony in the 1830’s and 1840’s. The story of their journey to get there originally is told in my song “Wagon Train.” Their initial goal was to settle in California, but halfway there they decided to stay put in Texas and let the wagon train travel on. Hey, it was a long trip! My grandparents (who are the subject of my song “Naomi”) were each born outside of Tennessee Colony, but their families moved “back to the land” in the 1930’s when they lost their livelihood during the Great Depression. My grandparents met in the seventh grade at the one room Tennessee Colony school, started dating shortly thereafter, and married during my grandfather’s senior year at Texas A&M University (which is my alma mater as well). Two days after his graduation, he enlisted in the Army and went to Europe to fight in WWII. He fought all over Europe in Patton’s Third and made it home without a scratch. My grandparents settled down in Houston after the war, and my mom was born soon thereafter. I was born and raised in Houston as well, but we often traveled to Tennessee Colony through the years for our frequent family reunions, and my grandfather, who was quite the storyteller, frequently told me stories of his experiences growing up in the tiny East Texas town.

You’ve said that discovering the photo of your grandmother, Arabella, in a family scrapbook set you off on the path to write songs about your family and your home.  What was it about the experience of finding that particular photo that led you to the making of Tennessee Colony?

My sister looks exactly like my mom, but I always thought I looked like a mix of my parents, even favoring my dad’s side of the family a bit more. But then one day I was helping my mom unpack some winter clothes for my grandmother, and I picked up a scrapbook that was sitting on top of one of the boxes. A photo fell out onto the ground, and when I picked it up and looked at it, it felt like I was seeing myself in one of those old timey sepia photos you can take at the amusement park! I flipped the photo over, and it said “Arabella Shelton, School Teacher” on the back. I asked my mom who that was, and she said it was my Nana’s mother – Shelton was her maiden name before she married my great grandfather. Neither of us had ever seen a picture of her when she was younger, so we were both shocked at the resemblance! 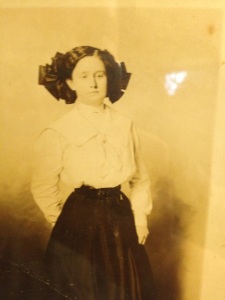 Like I said earlier, I grew up hearing all of my granddad’s old family stories (many times over, as those things tend to go). I thought I knew all the family history in great detail, and I didn’t really think there was much else left to uncover. But finding that picture of Arabella made me rethink that…if I missed the person who I resemble the most, what other parts of the story was I missing? It also made me examine a lot of ideas about who we are in the context of genes, nature, nurture, our choices, and the like. Interesting stuff, to me at least. So, like we songwriters do, I started to write about it (see “All That Love”). Then I thought it might be cool to set some of my grandfather’s stories to music as well. I didn’t imagine that it would turn into a full length album, but as I wrote more, the songs really felt like a collection to me, and from there it became a fully formed project. It really ended up being a labor of love and an homage to my family, particularly to my grandfather, the storyteller.

Describe your experience recording Tennessee Colony. Did you have specific ideas about the orchestration of each song of did you leave all of those decisions up to your producer, Jack Saunders?

Making this album was such a blast. I had previously worked with Jack on an album I made with two of my Houston songwriter friends called The Grievous Angels, so we had a really good, organic working relationship going into it and just hit the ground running. He is an extremely talented singer-songwriter in addition to his production skills, so he really has a gift for helping a songwriter realize their vision for a project. On this record, I knew that I wanted it to generally have a very bluegrassy, gospel feel, in part because that was the music of the 1830’s, when my family settled in Tennessee Colony, as well as the 1930’s, when my grandparents moved back there. So I knew I wanted there to be an upright bass, string band kind of a feel, with gospel style background vocals and maybe a bit of B3. Jack has some really amazing buddies like Rick Richards, Lloyd Maines, Eleanor Whitmore, Riley Osbourn, the guys from Wood and Wire, etc., so we were really able to call in the ringers and get a really cool sound!

You have collected numerous songwriting awards and accolades.  Did you ever envision that you’d be receiving such honors when you first started out?

No way! I’m still pretty surprised by all of it. About four years ago, I decided to take a year-long break from practicing law to see if I could give it a go with music. All I wanted was to write and play my songs and see if that could translate into any sort of living. I had no idea what it would look like or if it would even be possible, but it’s been a really cool journey thus far! The accolades have been totally unexpected, but really nice, of course. It encourages me that somebody out there likes what I’m doing (and it’s helped with booking shows too)!

Some of your influences are pretty strong and determined women—especially Dolly Parton and  Lucinda Williams,  Do you find that you’re not only just influenced by their music making abilities but by their business acumen?

Absolutely! These days in the music industry, an artist has to wear so many hats: songwriter, performer, booking agent, manager, accountant, marketer…the list seems endless sometimes, and sometimes it feels like making music is too small a part of it! It can all be really overwhelming, but it’s also super rewarding when you write that next song or really connect with an audience or book that next big show. I definitely find inspiration and encouragement in those who have come before me, like Dolly and Lucinda, and also everyone around me who is making it work day in and day out.

I couldn’t help but notice that Janis Joplin is on your list of favorite musicians.  Did you grow up holding her in high esteem as a true Texan treasure?

Janis is indeed a Texas treasure! I discovered her music later down the line – when I was growing up I didn’t even know she was from Texas! I wouldn’t say that she’s one of my favorite artists to listen to, but I am definitely influenced by and admire her as a performer. Her signature voice and her ability to put her heart and soul into a song to capture an audience were truly one of a kind.

Do you have any hopes and dreams that you’d like to fulfill within the music industry?

Yeah, I think most musicians and songwriters are inherently dreamers, so I definitely have some bucket list type venues I’d like to play, dream co-writes or collaborations, and that sort of thing (I mean, who doesn’t want to play the Ryman or sing with Emmylou?!). Ultimately though, I’m just trying to focus on getting better at what I do, being kind and authentic, and working hard. So far, my experience has been that by doing those things my life in music has already exceeded my hopes and dreams, so wherever it goes from here will be a fun adventure! I’m definitely excited to see where it goes from here.