Greg Klyma is a product of the Rust Belt—Buffalo, NY to be exact.  As his bio states, he’s an old-school troubadour with contemporary savvy.  He’s a guy who has a ton of stories to tell and songs to sing.  He’s rambled all over the country but decided to call Somerville home in recent years.  The greater-Boston area has benefited from his presence.  If he’s not on stage doing his own set, he’s sitting in with the best of the best at any number of clubs, coffeehouses or festivals.  He’s a go-to kind of musician who is much beloved for his musical integrity and hard-working ethic.

To learn more about Greg, check out his website.

And for good measure, here’s Greg and friends playing at his regular Monday night gig. 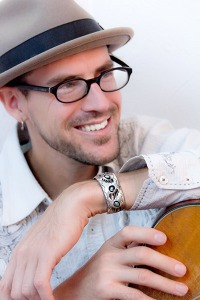 I’m always interested to hear about what hooked musicians on music.  What’s your story?  Were you influenced by someone in your family?  Or did you have an inspirational teacher?  Or did you discover music by listening to some kind of electronic device?

Music was always around. Whether is was mom and dad listening to Everly Brothers and Buddy Holly, going to see my cousins’ Polka band or listening to grandpa play harmonica in the living room while my uncle played guitar and sang country songs, there was music. My friends and I bought and shared records, made mix tapes. I didn’t know people lived otherwise.

Has your taste in music changed over the years since you’ve gotten deeper and deeper into the Americana scene.  Who would you say are some of the best musicians and songwriters around today?

Anais Mitchell and Jonathan Byrd are two of the best songwriters I know. Duke Levine and Michael Bean are a couple of my favorite musicians. I don’t listen to much current music ‘cept what I might catch on WUMB. At the moment, I’m listening to Kris Kristofferson’s first albums on Monument Records. “Sunday Morning Coming Down” is as good as songwriting gets.

Did you take music lessons or are you self taught?

I took guitar lessons when I was 13. I studied music a little in college, mostly because I thought I was supposed to. I haven’t stopped learning. If I live a long life, I hope this remains truth. Lately, I’m inspired to work on my lead guitar playing. I have a Telecaster and Fender Princeton Reverb. Now, if I only had chops.

Tell us about your latest release, Another Man’s Treasure. It got some great radio airplay which makes me do all kinds of crazy happy dances.

Thank you. Yeah, it was in rotation on WUMB for a while and then got added to rotation on The Village on Sirius XM. All very exciting!

Another Man’s Treasure was my first fan-funded project. We reached our goal a full week before the deadline. Then, on two glorious days in June 2013, me and 7 friends gathered at a barn-turned-studio in Eden, NY. Some had driven in from Boston, a couple live in Buffalo, the organ player drove up from Central PA by way of a wedding in Indiana, and yet another flew in from Houston, TX. On Day 1, we tracked 10 songs over 13 studio hours; on Day 2, 6 more songs in 8 hours. All on 1″ analog tape! The 16 songs were mixed down and we found the 12 songs that made for the best album. I couldn’t be happier with the sound, vibe and feel of this record. Folks can find it online here:

I’m not familiar with Village Produce. Is it like CD Baby or Amazon?

I’m really down on all the big stores and how they ultimately undercut us independent artists, playing on our emotion and desire to get our music out there. I prefer farmer’s markets to big chain grocery stores (even though the big chains fit my budget better – which is why I end up shopping at them). Village Produce is run by a friend. He’s local to Boston. So, while in theory, I’m supposed to have my music available in as many outlets as possible, the only place you will find Another Man’s Treasure is at my concerts or at Village Produce. This is what local looks like.

One track that stands out is actually not written by you but you definitely made the song your own. What inspired you to give “You Are My Sunshine” such an interesting and plaintive take?

You told me once dear, you truly loved me and no one else could come between. Now, you’ve left me for another. You have shattered all my dreams.

She “shattered” all his dreams. This is a happy song?

The production of the album is really spectacular. There’s a lot going on and it’s all so tight. Did you produce it or did you work with someone else on it?

Ryan Fitzsimmons and I produced it. I’ve played a lot of gigs with Ryan and had played some with most of the other musicians, but they all hadn’t played together until we started to roll tape. It was an interesting experiment. They all brought independent gig experiences to the songs, but there was this freshness and excitement of playing this music with new talented friends. Everyone clicked, and that’s good luck.

It was great to work on this project with my brother in arms. Ryan was particularly helpful when it came to mastering and sequencing the album. I nearly left “Scream” off the album. Ryan fought for it. It was a great call.

If you were asked to put a compilation of your favorite Greg Klyma songs for someone who was not familiar with your music, which ones would you choose and why?

I think you just asked me what my favorite songs by me are. I’d probably just make someone a mix tape of Steve Earle, Tom Petty, Todd Snider and The Band with some Dylan, Stones, Waylon, Willie and Cash peppered in there. Then, I’d invite ‘em to pick up a copy of Another Man’s Treasure. It’s where I’m at right now. By the time you read this, I’ll have a different answer. Come to show. I don’t play songs I don’t like.

You’ve created a lively scene called Americana Mondays at P.A’s Lounge in Somerville. Do you generally play with the same band every week or do you have guest musicians sit in and mix it up a bit? What’s your favorite part of playing gigs like this?

Americana Mondays make my week. I’m regularly joined by Joe Klompus on doghouse bass and Steve Latt on pedal steel, fiddle and harmony vocals. We play a lot of Hank Williams, Ernest Tubb and the like. Most Mondays we start as a trio. I’m lucky to have a lot of talented friends. They come out for a beer or to network with other musicians, then I put ‘em to work in the 2nd set. By the night’s end, there are usually more musicians in the band. It’s a fun hang.

What is it about the Cambridge / Somerville area that attracts so many musicians?

Community. The sense that we’re all in this together. That’s what got me.

One of your many talents, beside playing a multitude of instruments and writing fine songs, is that you are a most excellent storyteller. It’s clear to me that you craft these stories very carefully and choose the correct words and phraseology to set a tone for the tale you’re spinning. Have you always had a penchant for storytelling?

Growing up I remember being asked a lot “do you talk just to hear yourself talk?” For a while I wondered, “do I?” All the while I was simply honing my craft of choosing correct words and phraseology. Could be I talk because other people like to hear me talk.

You spend an awful lot of time in your car when you tour. Do you listen to music, NPR, audiobooks, or all of the above?

I’m not touring so much these days. When I am out there, I don’t listen to much of anything. The road is noisy. I might look for All Things Considered and I do keep the iPod nearby should I need a fix of Hank Williams or Tom Petty. By and large, I value the alone time.

What’s the longest road trip you’ve ever taken?  Do you have any advice for young singer-songwriters who wish to pack up their cars and take their songs on  tour?

I have all sorts of advice for young songwriters. If they happen to be in town, we can go out for coffee or drinks and I’ll yap till it crushes their souls. If they aren’t dissuaded, then good luck to ‘em. No one is doing this because it’s easy.