Here’s a new musical term for you to learn today: Songswarm.  Taylor Pie (born Susan Taylor) has helped to coin the phrase and has introduced many a fascinating show along with courageous musicians who have to play along with each and every song whether they’ve heard it or not.  Taylor had led the life of a troubadour and has shared the stage with many great musicians.  She was inducted into America’s Old Time Country Music Hall of Fame. But right now she’s introducing the world-at-large to the concept of songswarming with a new Puff Bunny record release.

For more information about Taylor and her songswarm buddies, check out this website.

For those who aren’t familiar with the concept, could you explain what a songswarm is?

A songswarm is improvisational performance art for songwriter performers who are willing, confident enough, and able to accompany fellow songwriter performers on each other’s original songs. I prefer to have a trio of participants…that gives everyone more songs and for me, there’s magic in the number 3.

Does a songswarm differ from a song swap?  Is it more challenging when musicians are gently coerced into actually participating and playing on songs that they might not know?

A major difference between a songswarm and a song swap is that each songwriter MUST sing, play, tap, whistle, hum, whatever on everyone else’s songs. It is definitely a test of how quickly one can musically respond to what the ear is hearing, perhaps for the first time. It’s also a fun opportunity to stretch out and be inventive! I started guitar at 9 and began playing in the school band in sixth grade as a percussionist/drummer; sometimes I just reach for a shaker or harmonica out of my toy box that accompanies my guitar case when I travel.

What’s the genesis behind the creation of Songswarm, Volume 1?

I came up with the idea of “songswarm” as a way for songwriter performers to share their work with peers and audiences in a relaxed, fun and embracing atmosphere.  I’ve never encountered an audience that didn’t seem to pull for the performers, knowing that they may be meeting for the first time, and may have never heard the song they are about to play.  The listener support seems to inspire us performers to step out of our boxes and take chances with arrangements. 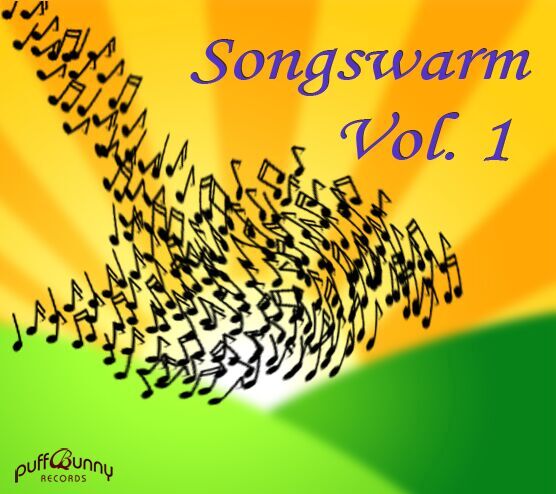 How did you come to choose the musicians on this album?

I chose them for their great songs, quality musicianship and because hanging out with each and every one of them is pure pleasure!

How long did it take you to put this collection together?

It was a couple of years collecting the recordings and another year to find the right producer engineer to help me mix and sequence the final product. Ren Renfree of AREN Creative filled that position beautifully! All together it took over four years to bring to fruition the final product.

Tell us a little about each one:

George Ensle: George is a consummate Texas songwriter performer and storyteller. The first time I heard him was at a SWRFA conference and I was an instant fan of his work. He’s also a tireless promoter and gracious songswarmer.

Michael O’Connor: Michael hails from Corpus Christi, TX and the first time I listened to him via his Devil Stole the Moon CD, I was hooked. I invited him to come play my house concert series and we’ve been friends ever since. His guitar playing is well known in Texas and his songs are unforgettable!

Greg Whitfield: Greg is first of all, one of the kindest humans I’ve ever met and has been a sought after studio musician for years in the Austin area. The quality of his songs and guitar work made him a natural songswarmer.

Jack Saunders: I met Jack while on the 2014 Songswarm Tour with Michael & Jeff and when George and I were organizing a few songswarms, Jack helped us book McGonigel’s Mucky Duck in Houston, and agreed to come on board as part of our trio for that event. His song, “This Highway,” is one of my favorites on the album.

Jeff Plankenhorn: Jeff is originally from Ohio, but has made his mark in the Austin music scene not only as a valued band member, but also as a solo performer. When I first heard him perform, “Trouble Find Me,” I knew I wanted a chance to sit next to him on stage someday. His performance on that song on Songswarm Vol 1, is my favorite version.

I understand that you’re already planning on a Volume 2!  Care to spill the beans about that project?

Ren and I are currently mixing the Bugle Boy Songswarm with Michael, Jeff and me. PuffBunny will be releasing it as the followup to Songswarm Vol 1.  It’s a bit different from Vol 1 which to me is like an album of hits! The next release will be more intimate and represent what it feels like to attend an evening of songswarming.

Now it’s time to talk about you and your fascinating musical history.  How did growing up in East Texas influence your musical taste?

My mother had three sisters and they all sang. Harmony was a given because the church we attended didn’t use musical instruments, only voices. I was hearing four-part singing from the cradle on. Our family moved to the Tulsa, OK area my first grade year in school and at 9 I began guitar lessons with Dick Gordon. Dick put me on stage before I was 10 playing and singing my favorite Elvis songs. Back then radio wasn’t segregated, you would hear Dean Martin and then Chuck Berry followed by Doris Day! Perhaps that’s why I became so eclectic in my musical tastes which has always influenced my songwriting.

You were a founding member of the Pozo Seco Singers in the 1960s and had a hit record “Time” that charted for over a year.  How much of an impact did that have on your life?

It changed my life forever. There I was a 19 year-old kid with a hit record. Not only that, but we ended up being managed by Albert Grossman who also managed Bob Dylan, Odetta, The Band, Janis Joplin, Richie Havens, and many more. It took me a few years to get my feet back on the ground.

You and bandmate, Don Williams, have been honored by country and traditional music associations because of your contributions to the music.  When you were first starting out with Don way back in the 60s, did you ever imagine that you’d be honored in such a way several decades later?

Honestly? It never occurred to me. I just felt I’d found my place in the world of music and continued pursuing my quest to become a good song poet and musician.

What’s been the most rewarding facet of your storied career?

Meeting people via the traveling troubadour way of life. I’ve got friends all over the world now because of music.

When you’re not playing or listening to your friends playing music, what do you like to do?

I like to take walks along the creek where I live on a 20 acre, more or less, farm in the foothills of the Cumberland Mountains! In the summer, you’ll usually find me floating in the creek daydreaming. I’ve lived in the same house now for almost 30 years and love my community of transplants, farmers and neighbors. Peace within, yo