Caravan of Thieves is a magical musical configuration of four talented people (Fuzz, Carrie, Ben and Brian) whose joy while playing together is palpable. Walking into a performance by these four is akin to having the sun break out from behind ugly gray clouds after an extended period of darkness.  They light up any stage they are on and the audience is swept into their mesmerizing world of gypsy jazz, rootsy folk, and all-around good-time music.  It’s a sound that is unique and a sound that needs to be heard.

To learn more about Caravan of Thieves, check out their website.

Their newest official video of “Dead Wrong” is a little snapshot into their musical world.  Their video for “Raise the Dead” is another artistic example which aptly conveys their music and their unique perspective. 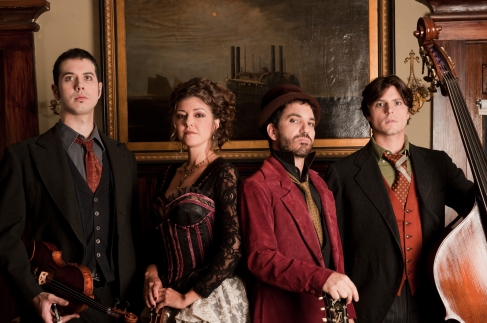 The band has been together for over five years. Do you feel the direction of your music has evolved in any particular ways since you first started playing together?

Fuzz: Absolutely. We love so many styles of music, and want to keep introducing our audience to new and interesting genres. When we started the band, we mainly used gypsy jazz as the backdrop to write our songs around.

Carrie: That’s still a big part of it but over the past few years we’ve brought in other styles to blend like other swing music of that era, folk, early R&B, percussive music, etc.

When you first started singing together as a duo, did you ever imagine that you’d be playing as part of such a high-energy group known for their on-stage musical antics?

F&C: We didn’t imagine the whole Caravan of Thieves concept at first, it developed over time, especially the interactive moments which came about through years of on stage performance. But back when we were doing our duo sets people often commented on how high the energy was for an acoustic duo. We both have outgoing personalities and an interest in many forms of entertainment beyond music, so it wasn’t something we envisioned all at once, but it’s also not too surprising.

You’ve been quoted as saying that by bringing your street performance to the stage that it led you to the 1930s style gypsy jazz. Were you familiar with musicians like Django Reinhart at the time or was this a moment of real musical discovery?

Fuzz: I had been a fan of Django Reinhardt for many years but never imagined I would be playing that style of music. But it was a eureka moment for us once all the ideas converged.

Carrie: And since we wanted to create a stripped down sounding acoustic project and have it be something we can perform either on a street corner or a big stage, the gypsy influence was very appropriate.

What would you consider the high points of your time together as a group?

Carrie: We’ve had lots of fun touring around North America over the years, some of the less traveled locations certainly stick out like Baffin Island, Canada or beautiful scenic areas like southern Oregon.

Fuzz: But we still get the biggest high going to a place we’ve never been, not sure if anyone has even heard of us, and finding out the show is sold out or close to it. It’s very exciting to know that what you do is being appreciated.

You’ve recently released a single called “Dead Wrong.” I’ve got to say, the video is stunning. Did you come up with the storyline? The video has a nostalgic feel of times gone by; when you wrote the song did you feel that or was it the filmmaker’s imagination?

F&C: The song was written with a melancholy feeling in mind and at the time we were listening to a lot of Robert Johnson. His voice, the sound of the recordings and the guitar work all have a beautiful but eerie quality to them. This did influence our writing for “Dead Wrong” which is mostly about a failed relationship using lots of death metaphors. But we didn’t want the video to look and feel gloomy so we focused on the tongue and cheek aspect of the hook, the playful sound of the recoding and the overall “old-timey” vibe. We had a basic concept going in where a couple would be trying to find one another throughout the video, using bicycles to deliver flowers, walking around town, etc. We presented the basic idea to our friends Dan and Nina (who produced our “Raise the Dead” video previously) and they took it from there.

Tell us more about the making of the video. It looks like you might have shut down an entire part of a town in order to do the filming!

F&C: That would have been nice! But we couldn’t shut down Stafford Springs, CT. Many of the local businesses really opened their doors to us though, let us use their stores for shooting, changing, borrowing props and clothing, etc. They were all very helpful. So we just searched out a few locations that had light traffic and an old town vibe that we can build scenes around. We shot quickly and moved on.

Do you have any plans for recording any more new songs in the near future?

F&C: We have been writing a lot this winter with the goal of getting into the studio by March/April and record our next full length album. We’d like to have it released before our fall tour.