There once was this kid named Matt Nakoa who grew up on a goat farm and went off to learn all he could at a prestigious music school in Boston.  While at the aforementioned college, he learned a lot about music but he also learned a lot about what it takes to live the life of a musician and play the kind of music that feels just right for him.  Apparently it’s working, Matt is this year’s Kerrville New Folk Winner…..and

Matt Nakoa is one of 24 Emerging Artists chosen for this year’s Falcon Ridge Folk Festival.  The Emerging Artist showcase is always one of the highlights of the festival. The musicians are chosen by a three-member jury and are given the opportunity to perform two songs (not to exceed ten minutes).  The audience votes for their favorites and three or four acts are asked to return to the main stage the following year.

You can learn more about Matt on his website.

Enjoy this video of “Beggar by the Weekend.” 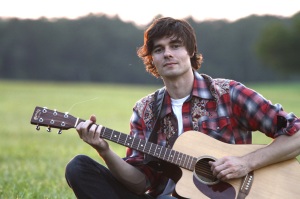 A goat farm? Did you really grow up with kids and their goat parents?

I did! We even kept kids in the house and bottle fed them to a certain age. The goats had beautiful names like Trace O’ Magic, Broken Hatchet, Mary-Yellin’ … Zenda & Zulu were sisters … and I named a newborn baby Pumpernickel.  I was there when some were born. I was there when some died. I remember I’d fill up my red thermos cup fresh from the utter. Made me a pudgy baby! We also had chickens, turkeys, pigs … gardens and orchards.

Did you gravitate toward the piano as a young boy?  What were your favorite pieces to play?

I sang first and played trombone for a number of years before I discovered the piano. I was about 12. It was strange how much sense piano made to me. I just knew how it worked. Once I came home from school very late, after dark, and was interrogated about what manner of trouble I’d been causing. Truth was, I’d hid away in the school auditorium to play the piano!

I made up my own tunes to play at first, because I couldn’t read piano music.

Were you so focused on classical music that you didn’t pay much attention to popular music?  Or did you dip into other genres of music along the way?

I’ve never been good at (or interested in) distinguishing between genres of music. I fell in love with melody, texture, rhythm, the smell of the instrument oil, of the wood, the paper. Classical music became my thing because it was shapely and sexy and adventurous and no one seemed to understand it. Perfect for an adolescent boy! I would fall asleep with headphones on. Pictures of composers hung on the wall at school and I wanted to know them and hang with them someday. I liked music that commanded my attention. For that reason I also liked some of the grunge rock coming out at the time. Around age 15, I got into some sugary pop stuff. It was like a sugar addiction and it seemed like everyone was hooked! I would pull apart the ingredients of those songs to see what made them POP. Around age 17, I got into Led Zeppelin and Hendrix and I didn’t even know why! They were often sloppy and abrasive. Turns out it wasn’t music for my intellect, it was a lesson in Mojo – the emotionality and spirituality of rock n’ roll.

And then came Berklee.  Is this when you truly began thinking of yourself as a singer-songwriter?  Was it empowering to discover that you had something to say and sing about?

At Berklee I wanted to sing and write songs but I was also wildly self-conscious. (Now, I suspect everyone there was.) I learned the tools the best I could, but my efforts were just crap until I got into the world and got my attention off of myself. There were many dis-empowered years when I felt perhaps I had something to sing about but it never came across.

How would you describe your time at Berklee?

Disillusionment. A fire. Dissolution into ash. Emergence from the ash.

You’ve got two albums of your original compositions out, Light in the Dark and A Dozen Other Loves.  How do they differ from each other?

I wrote Light In The Dark to play with a band of my closest friends (I’ve always wanted to belong to a rock band), so it’s a sweeping record with some adventurous arrangements. A Dozen Other Loves was the product of economy. I needed songs that I could pick up a guitar (nobody has pianos anymore!) and play any ol’ place. This aesthetic has received more favorable nods in the folk world, but I will assert that some of my better songwriting may be on the funky record.

You’ve also scored the music for a short film.  What was that like? How many times do you end up watching scene after scene in order to get the mood and tone right?

The scoring of Tumbleweed Tango (Google it. You’ll smile hard.) was more an issue of timing than anything else. I wrote a tango but they had already animated most of the film without adhering the movements to any sense of tempo! I had to play piano while staring at the screen, looking for the jump, turn, fall, etc., slowing down here and speeding up there (gradually, as not to compromise the musicality!) in order to accentuate the visual with the music.

It took a few tries! In the end it was a joy and success and I’ve since adapted the tango for the concert hall.

What are your short term and long term goals related to your music?

My long term goal is to die knowing I contributed my very best to humanity’s evolution toward divinity.