Elisa Peimer is one of the Chicks with Dip who was a new discovery for me.  I’m loving the fact that so many diverse musicians participated in the 40th anniversary tribute CD to Joni Mitchell’s fabulous CD, Blue.  This touring tribute show has taken the northeastern seaboard by storm. Catch it when you can!  Elisa has sung at way too many venues to count in the greater New York area, including Giants stadium.  Her music has been described as “cinematic” which makes it perfect for placement in TV and movies.  Take a listen at her website.

Here’s a good example of Elisa performing one her songs “Long Way to Heaven.” 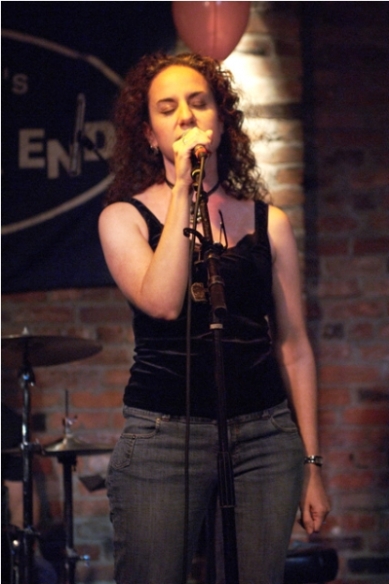 I must say—the press page on your website is quite impressive.  You have received dozens and dozens of rave reviews for all your recorded efforts.  But, as you say, all of that doesn’t really matter but when someone hears the music and it makes an impact…then that matters!   It sounds like you have had some touching experiences with music fans who have taken your music to heart.

One of your career accomplishments caught my eye. What was it like to have your video in rotation on the big CBS screen in Times Square?  Did you get to see yourself on a few occasions?  If so, what was that like?

It was really amazing.  The screen is right on 42nd Street and it’s huge.  They played my video for “Angel of the Blues” for quite a few weeks.  One day I stood there and took photos of it, and a few people stopped and looked at me, and looked at the screen, and said “Is that you?”  It was kind of surreal.  I attached one of the photos I took! 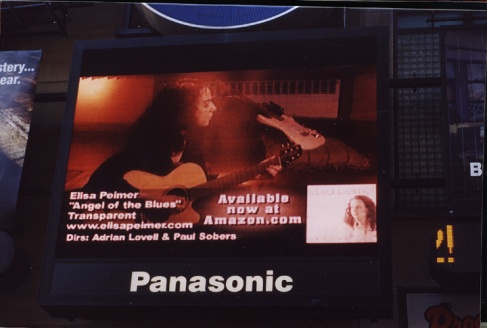 Some of your music has been placed in TV and movies.  Any memorable shows or moments?

The cool thing about getting your music placed is that the place it goes usually has nothing to do with the song.  I’ve had songs placed on everything from a Beavis & Butthead DVD trailer to a TV documentary about September 11.  People need music for everything.

Were you always a musical person?  Did you take up instruments as a child?

I started piano lessons when I was 8.  Unlike ballet or tennis, this was something I really wanted to keep doing so I stuck with it throughout high school.  I was always singing, but I never took formal lessons until I was an adult because I felt there were things about singing I didn’t know about and could really benefit from.  And guitar I picked up in my late 20s, mostly as a way to stretch my songwriting capabilities.  You write different kinds of songs on a guitar than on a piano.

Who were your musical inspirations?

Truth be told, arena rock and Broadway.  Somewhere between Styx and Annie, I found my bombastic side.

Since you’re part of the Chicks with Dip group, can we assume that you’re a Joni Mitchell fan?  What do you enjoy about her music?

Actually, I wasn’t very familiar with Joni before I started this project.  It’s been a wonderful experience learning these songs and being introduced to Joni’s music through the show and my friends.  I love the fact that her melodies are always surprising and her lyrics paint such strong pictures.

Your version of “Little Green” on the Chicks with Dip’s Joni Mitchell’s Blue: A 40th Anniversary Celebration is a tour de force.  What an incredibly moving rendition of that song.  Did you have any special connection to that song before the CD was recorded?

I had never even heard that song before this project.  We were all randomly picking songs from the album to do at our first show for Christopher Street Coffee House.  “Little Green” wasn’t taken yet, I took a quick listen on Spotify, and thought, yeah, I can probably pull that off.  After I found out it was about giving a child up for adoption, I really found great emotion and meaning in it, and it’s been a joy to perform.

The Chicks with Dip will be at the me&thee in Marblehead, MA on March 8.