My first introduction to Spuyten Duyvil was when they were selected as one of a couple dozen emerging artists at Falcon Ridge Folk Festival in Hillsdale, NY in 2010.  My friends, Pesky J. Nixon, put on  a pre-festival showcase of their own, lovingly called The Lounge Stage,  and invited the band along to play.  The minute they stepped over to our campsite, we all felt that we had known them all our lives.  Instant friendship.  And, man oh man, when they played their set that night—they were on fire.  They continued the blaze the next day when they made enough of an impression on the entire audience to capture the honor of being asked back the following year for the “Most Wanted Wanted” set.

Spuyten Duyvil has gone on to become one of my favorite live bands.  They exude ,energy, spunk, and sass. It’s impossible not to have fun listening to them and it’s impossible to keep from dancing and moving along with the music.  I dare you.  I double dare you!

To learn more about all the members of Spuyten Duyvil, visit their website.

Here’s a video of the whole band playing “Here and Hereafter.” 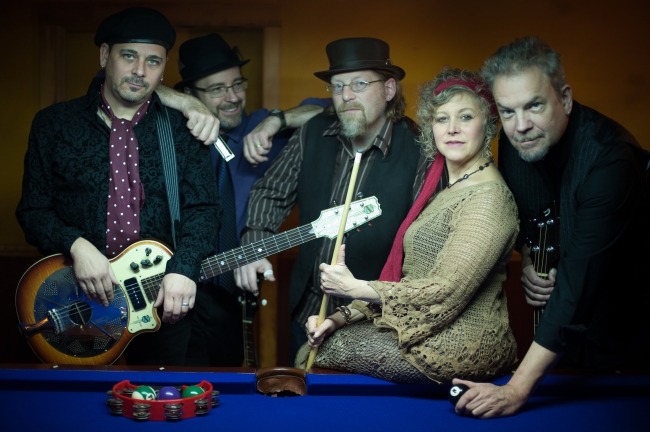 How long has Spuyten Duyvil been playing together?

Mark: Gigging since 2007. Hanging on the porch, eating BBQ, drinking beer and pickin’ since about 2005.

Beth: Although, the first time Mark and I performed together was back in the mid 80’s (!).  I sang backup on one song for a fraternity gig he played with his slightly dysfunctional college band.  That was followed up with our attempt at a blues band in San Francisco back in the 90’s. Much happier with our current efforts!!  A little bit of learned and earned wisdom over the years has made for a far more genuine, creative experience for both of us.

How would you describe your music?

How would you define “Old-timey” or “Americana” music for those who aren’t familiar with those terms.  Spuyten Duyvil’s music has been called both.

Mark: Well, we play both… Sometimes in the same show and sometimes as dictated by context. If we are amplified and playing our full rotation, it’s Americana. If we are playing an acoustic, trad gig, it’s Old-Timey. That said, we always have some Old-Timey in our Americana sets…

According to the Internets…”Americana, as defined by the Americana Music Association (AMA), is “contemporary music that incorporates elements of various American roots music styles, including country, roots-rock, folk, bluegrass, R&B and blues, resulting in a distinctive roots-oriented sound that lives in a world apart from the pure forms of the genres upon which it may draw. While acoustic instruments are often present and vital, Americana also often uses a full electric band.”

And Old-timey is “Old-time music is a genre of North American folk music with roots in the folk music of various cultures of Ireland, Britain, Africa, and Continental Europe. It developed along with various North American folk dances such as square dancing, flatfoot dancing, buck dancing, and clogging. The genre also encompasses ballads and other types of folk songs. It is played on acoustic instruments, generally centering on a combination of fiddle and plucked string instruments (most often the guitar and banjo).”

So, both styles draw from the same roots, but are typically presented differently. Americana is more contemporary, electric and incorporates elements of modern pop music with a goal of reaching a broad audience. The Old-Timey is acoustic and much more traditional. Bands that are strictly Old-Timey generally appeal to a more specialized audience that is more focused on the historical context of the music.

Do you have any musicians who you really look up to for inspiration for either their songwriting abilities or their musicianship?

Mark: From a songwriting perspective, I love Johnny Flynn and the Wood Brothers right now. Both strike the perfect balance between the old and the modern. As for musicianship, what is the most interesting to me is ensembles and how they work together. Going back to when Spuyten Duyvil was just getting started, we drew inspiration from Crooked Still, The Duhks and Ollabelle.

Beth: I would also add that we’ve been inspired by Buddy and Julie Miller too.  The interplay between them in live performance and in their numerous releases is pretty inspiring.  They are my model husband/wife team that have made amazing roots music together over the years.

I remember hearing a story about how you and Beth happened upon Falcon Ridge Folk Festival many years ago. Was it quite by chance?  Did you ever imagine that you would be headliners on that stage one day?

Mark: This is in fact the very beginning… In 1999, Beth and I, having long ago given up on the dream of being performing artists, were deeply involved in work and life and raising our one-year old daughter, Dena. We were up in Columbia County and had just dropped her off with Grandma for her first overnight away from mom and dad. We planned to enjoy our freedom with dinner and drinks in Hudson NY. In the late afternoon, we were eating lunch in the Good Earth and overheard our waitress waxing poetic about an amazing night of music under stars… We looked at each other and it slowly dawned on us that…. we could go! And so we blew off dinner and went to Falcon Ridge for the night. As soon as we sat on the hill, we knew we had found our tribe. We also realized that the performers were not teenagers. We became Festival regulars and this was the seed from which Spuyten Duyvil grew.

Beth:  Pretty sure that was the year we experienced Moxy Fruvious and Eddie from Ohio for the first time.  Sweet!

Once we started to play again and write songs, it was a pie in the sky fantasy with no realistic path from here to there that we would ever find ourselves on the main stage. When we were selected as Emerging Artists in 2010, I almost exploded in the car when I got to roll down my window and let the volunteer know that we were headed for ‘performer parking’…

When you write a song, do you think of the various musicians in the group and how their own particular sound will be incorporated into the song or do you just present the song to them and let them at it?  😉

Mark: Definitely the latter. I think a well-written song should stand up as a single voice with no instruments and that is how I tend to write. Only after I can sing the whole thing and feel that this would stand up with no accompaniment in the middle of a set, do I pick up an instrument and figure out what the chords are.

Beth:  Also, our Spuyten Duyvil compatriots play a pretty central creative role in the development of our songs.  We try to rehearse with the band weekly.  Everybody contributes with Mark laying down the base of a song and his/my vision for it.  We generally avoid writing parts for folks.

Are you always on the look-out for new songs to cover?  Your renditions of “Shady Grove” and Abbie Gardner’s “Honey on My Grave” are outstanding.

Mark: I am always listening to and  learning trad tunes. In fact, we are planning to record and release a CD of acoustic public domain tunes sometime in the next year. Modern covers tend to come into the rotation from specific situations. We learned “Honey On My Grave” for a Tribes Hill Songbook project where local artists did a show covering each other’s music. We also learned a bunch of tunes like “Poor Pitiful Me” for Ethan (Pesky J. Nixon) and Robin’s wedding. Yes, we were the band… Our only General Business gig ever ;-}

Do you have any favorites among your original songs? Some that are the most fun to play?

Mark: I love all of my children equally (I think that is what one is supposed to say…). Actually, I really love to play Beth’s tunes (Bitter, Hell and High Water). They are ours, but I can approach them without the complex feeling I have for my own writing…

Beth:  That’s nice darlin’.  Thanks! 🙂  I have to add that I love the way Mark will give me one of his songs to sing and together we find a balance between what he visualizes for the song and what I can do to make my vocals my own.  I think everyone in the band loves that process of taking the material and exploring the most successful ways in which to find the personal connection….ultimately wedding one’s own artistic expression with the rest of the crew.

What’s next in store for Spuyten Duyvil?

Mark: Well, more touring. We are spreading our wings and beyond the Me&Thee will be hitting Tiverton, RI, New Bedford, MA, Rockville MD, Portland, ME and a return run to Chicago in 2014.  We’ll be hitting a full schedule of summer festivals. We are also planning two CDs, the acoustic one I mentioned above for 2014 and a full Spuyten Duyvil record for 2015.

Beth: Also, a special musical “jaunt” is in the works for Jamaica, if we can swing the logistics and rally enough participating friends and fans.  Yah Mon! Wanna come???