If you know anything about the Boston music scene, you have undoubtedly heard Jimmy Ryan’s name mentioned.  He’s one of the most in-demand session players in town and plays a mandolin like there’s no tomorrow.  His song “John Brown” is often covered by Session Americana and Pesky J. Nixon.  It’s a show-stopper of a song.  Anyone who can write a song about a nineteenth century abolitionist and give it so much soul is someone who earns my respect.

Jimmy has recorded with Warren Zevon, Morphine, Catie Curtis, Brooks Williams, Girls, Guns and Glory, Sarah Borges and many others.  Anyone who loves a groovin’ mandolin, will love Jimmy Ryan.

To learn more about Jimmy Ryan, check out his website.

He’ll be opening the show for The Greencards at the me&thee in Marblehead, MA on Friday, October 19. 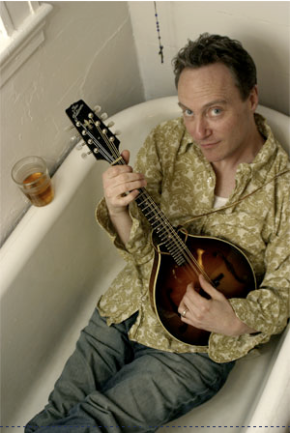 When did you first pick up a musical instrument?

I started playing 1 string guitar when I was 8 years.old.

Your biography says that you grew up attending bluegrass festivals and whatnot.  Did you immediately feel drawn in by that kind of music?

All my buddies were huge music fans growing up. Into all kinds of music. The local college radio station in Binghamton,NY was incredible and in the late 60’s and early 70’s there was sooo much good music. They had folk shows. Country blues was big there. I went and saw Bill Monroe, Doc Watson, Sonny Terry & Brownie McGee, Balfa Bros, Clifton Chenier. Chuck Berry, Pharaoh Sanders, Victoria Spivey. It was a great place–SUNY Binghamton for the local kids to discover other worlds thru music etc. I used to follow Utah Phillips around the place.

I had some friends who had a pile of guitars and banjos that we’d all whack away on.I picked mandolin because nobody else wanted to play it and I’m always for the underdog. It was then my Mom told me about Bluegrass and Bill Monroe (she was from the Allegheny Mtns). I always enjoy putting mandolin into unexpected musical contexts. I enjoyed David Grisman’s contribution’s to the Grateful Dead’s early stuff, but would not consider myself a Deadhead. All my rock loving pals enjoyed Bluegrass as well. There wasn’t as much gentrification of music then. There was music you liked and music you didn’t but you didn’t much care what people called it.

Tell us about some of your early bands like the Blood Oranges, Beacon Hillbillies and Wooden Leg.  Is that where you perfected your mandolin chops?

Blood Oranges was totally me trying to get a Bluegrass/Rock hybrid thing to varying degrees of success. Cheri Knight played bass and sang and wrote some incredible songs. She later recorded a record with Steve Earle producing that we all played on. Mark Spencer played guitar. Ron Ward played drums.  I  guess if we were around now we’d be considered Americana..Back then our record label didn’t know what to do with us. It’s that genre thing again..Record stores couldn’t find a category for us in the bins. The same day we got a 4 star review in Rolling Stone we cleared a club in Atlanta for being weird, I reckon.

Beacon Hillbillies was a band with the late great John McGann and Jim Whitney and a variety of pickers, like Tony Trishka, Stacey Phillips, Evan Stover, Gordon Stone, Matt Glaser.We only toured in Japan and Singapore.

Wooden Leg was another Bluegrass Rock experiment with Joe Kessler on Fiddle, Brian Dunton on bass,Mickey Bones on drums. We did some touring opening shows for Morphine that were quite fun.

My chops are pretty average, as far as I’m concerned..I love playing Mandolin but I’ve never tried to get into being the best at it. I don’t enjoy competitive approaches in music..It’s about joy not power, to me.

We’d love to hear some stories about your work with Mark Sandman. What are your favorite memories associated with Mark?

Mark Sandman was a true musical adventurer and I really responded to that. He recorded constantly and you never knew when you’d end up on one of his records..We had a great time hanging out talking about music, art, food, the ladies. He was a lot of fun.

You’re an in-demand side musician.  Do you feel a lot of pressure when you get hired to do these gigs with musicians who you may not know?  Or do you just dive in and let your musical instincts take over?

Sideman gigs are always interesting-you are there to serve the song and the singer. It’s not about you..I spent 6 years working as a sideman with Catie Curtis and I enjoyed the living beejeezus out it. She is one of the best.

I’m glad I chose the “music thing”-I don’t know how to do anything else.