Be prepared.  This is not your typical music interview.  I interviewed the band a mere three months ago when they were chosen to be part of the Falcon Ridge Folk Festival Emerging Artists showcase.  See that interview here.  Suffice it to say that Darlingside blew me away (up, down, sideways, and any other which way) with their performances  at the festival.  This band has real appeal – great music and presentation  and, as you can see from this interview below, they’re a lot of fun.  They let me ask some wacky questions and gave me some equally wacky answers.  I’d suggest checking out the earlier interview for more music related tidbits!

To find out more information about Darlingside, check out their website.  Meet Don, Auyon, Harris, and Dave: Darlingside!

This band has the most amazing videos.  Try these on for size:

“Blow the House Down”

Darlingside and the Heather Maloney Band will be playing at the me&thee in Marblehead, MA on Friday, November 1. 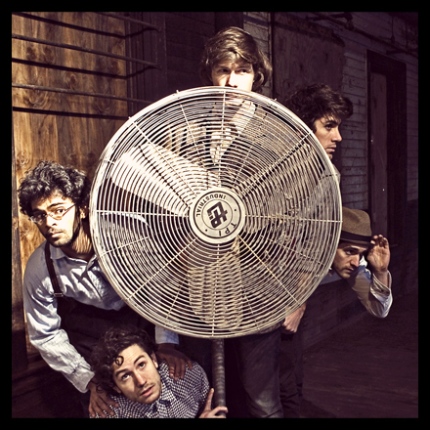 Are you good packers when you go on a band road trip?  We all know there’s a science to packing instruments, equipment and luggage.

DAVE: Sometimes we travel with a ton of sound equipment, and sometimes it’s just us and our instruments, and what’s amazing is that we’re actually way better at packing when we have way more stuff. Which is to say, we’re very good packers when we need to be, and when we don’t think we need to be, we really suck. But I’m willing to bet that if you gave us a tiny triangular van with diagonal poles running through it at irregular intervals, we would still find a way to fit all of our gear into it and have just enough room left to fit three out of four of our personal bags, and we’d be stuck taking the fourth one with us up front, and Auyon would probably end up using it as some kind of weird booster seat.

If you could collaborate with anyone on a recording, who would it be and why?

DAVE: Personally, I would say Will Smith, or maybe Justin Timberlake. They’ve both been a huge part of my musical education, and they’ve consistently put out recordings that make me incredibly happy, but they don’t appear to take themselves so seriously that they would be difficult to collaborate with. The music they make is sufficiently different from ours that we’d have to go well out of our comfort zones, and I think the result would be pretty wacky, in a good way. And as a bonus, when we were done, they’d probably go off and make a blockbuster Hollywood movie about it.

Tell us about the Darlingsidemobile.

HARRIS: We travel in a big maroon 15-passenger van named “Chauncey.”  Inside Chauncey, we have a coat rack for hanging clothes and a back bench with a down comforter for sleeping. The van has the worst sound system we’ve ever heard….if a song sounds half-way decent on the van radio, it must be a masterpiece on any other speakers.

Do you have any favorite kooky YouTube videos that crack you up?  (I’m a big fan of the Russian Trolololo man myself!)

HARRIS: This video of Joe Cocker at Woodstock serves as a reminder that diction is important:

Do you do any cover tunes?  Have you ever considered doing a song so OFF your audience’s radar that it might actually be cool?

DON: We do play cover tunes (e.g. “1979” by The Smashing Pumpkins, “Dancing in the Dark” by Bruce Springsteen).  When it comes to “off-the-radar” ideas, we find that our audiences are unfortunately SO hip that basically no song exists outside their purview.

If Darlingside had a mascot, who / what would it be?

What do you guys do to goof off?  Where would we find you on a day off?

AUYON: We tend to spend enough time on the road together that our days off are typically spend avoiding each other. If I had to come up with a perfect day off for the four of us, though, it would involve sipping coffee served by a misanthropic hipster in Cambridge, followed by a caffeinated jog through Watertown, where we rehearse. We would then take a group nap, ideally in a sunbeam. Don and I would share a blanket. We would end our day with a meal at Roksana, our favorite restaurant in Watertown, where we would each order a beef kebab marinated in pomegranate and walnuts and served in a wrap.

If each of you could be a Super Hero, who would you be?

AUYON: Harris would be Belle from Beauty and the Beast, based on his enviable tresses and affinity for speaking in song. Don would be Robin from Batman, since he is something of an amateur ornithologist and since he attended circus camp as a child. Dave would be the shark from Jaws because he loves eating things and because he likes acting coy. I would be Superman because I, too, am from Kansas, and I, too, sometimes enjoy wearing tight pants.