How many singer-songwriters do you know who live in a log cabin in Maine, have a sustainable garden and grow their own food, print their CD covers on an antique letterpress, and sing and play all over the country? Well, now you can say you know one and his name is Putnam Smith. Putnam is a multi-instrumentalist and changes up the pace and tone of each show with the ease of a veteran circus juggler except he’s using instruments and songs rather than balls or bowling pins. His lyrics are thoughtful and mature yet sometimes a little wry sense of humor shines through. Always entertaining. Always in the moment. Always right on.

To learn more about Putnam Smith, visit his website. 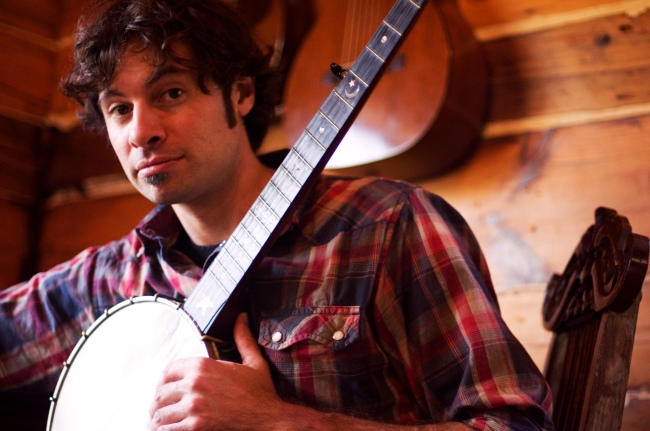 Nearly every publicity piece that I read about you mentions the fact
that your style of music harkens back to older days, maybe as far away
and long ago as the last century! Do you feel like this is an accurate
description of your style, and if so, why?

I have definitely found much inspiration from the venerable traditions
of American Roots music — specifically the genre of Appalachian music
known simply as ‘Old-Time.’  The Anthology of American Folk Music,
put together by Harry Smith in 1952, and released on CD in 1997 was
quite a revelation for me.  I lived down in Asheville, NC for a while, and
steeped myself in old-time banjo/fiddle music.  I love that old stuff.  I
do often throw in a traditional tune or two in my shows, though I mostly
get my fix of playing ‘trad’ with my contra dance band, Sassafras Stomp.
First and foremost I consider myself a songwriter.  I’ve been writing songs
since I was 7 years old — and Old-Time is but one of the many influences
on the songs I now write on banjo, guitar, piano, and mandolin.

Not only does your music remind people of old-time Appalachian tunes
sung on back porches in the Blue Ridge Mountains, but your entire
lifestyle seems have you with one foot firmly planted in the
past and one in the very real present day of technology.  You have
invited music fans into your world by showing them a bit about how you
live by sharing some fascinating YouTube videos about life on the road
and most especially…eating healthy while on the road.  Care to tell
us a bit about those videos?

Ahh, yes!  People often visit me at my log cabin in Maine, and comment on how it
feels like they’re stepping back in time a bit.  I’ve got an old Victrola, but don’t
have a TV.  I print my CD covers on an antique letterpress.  Not only do I play
my great-grandfather’s banjo, but I have a collection of cast iron pans — one
of which came from my grandparents (and perhaps further back than that!).
I think there’s a lot we in the 21st century can learn from old school ways of living.
I love things old-fangled.  My “Cast Iron Pan” video has now been getting some
great attention — just connected with a whole Facebook community of cast iron
pan enthusiasts!  As for the “Road Food Foraging” videos — that’s something
new I’ve been getting into: foraging for mushrooms and wild foods.  I love
learning about foods I can gather while out on tour, off the highway, or while
on a little hike in the woods.  Sure beats those fast food restaurants!!

Have you been a natural food kind of person forever?  Or is a fairly
new thing since you moved into a log cabin and began working the land.
How many months a year are you able to devote to music since we know
that you’re pretty busy planting, growing, tending, and harvesting.

I worked on a couple different organic farms, before taking up the music
professionally.  They seemed like contrary pursuits, the life of a farmer
and a traveling musician — but Maine has a rather short growing season!
So, in the summer months, I work on being an aspiring homesteader — that is,
growing as much of my own food as possible, playing local shows as my
“cash crop.”  Then, October through April, I travel all over the country
playing music.  This touring season, I’ll head out into the midwest as far
as Minnesota, down the East coast as far as Florida, than clear across
country, through the southwest, to meet up with my contra dance band
for a string of dances the length of California.

When you’re working on your land, do you ever get ideas for songs?
Are you able to get into a groove where you can think of topics,
lyrics, and sounds that you can then bring back home and mold together
into a song?  Or are you able to divorce yourself from your musical
world when you’re farming and vice versa?

First, let me be clear that I’m not a farmer, since I don’t sell anything I grow.
What I’m shooting for, is to get closer to the means of my own subsistence,
cutting down my expenses, so that I don’t have to make as much money
from music.  That’s the goal!  Trying to find the complementary aspects
of these contrary pursuits!  As for songwriting and gardening — I don’t
usually come up with song ideas while out working; though, there is something
deeply inspiring and fulfilling to me about working the land — I would say that
the physical labor out in nature helps still my mind, so that the creative
process can begin.

So tell us about Kitchen, Love…  How would you compare it to your
other recordings?

Brass!  I’ve been wanting to write out brass arrangements for a long time — mostly
for my piano tunes — and with Kitchen, Love… I decided to just plunge in and do
it.  So yeah, in addition to the usual instrumentation that you find in all my records:
banjo, guitar, mando, piano, cello, fiddle, upright bass, this album also has French
horn, trumpet, trombone, and soprano sax.  Pretty excited about it…

I know you play banjo, guitar, and mandolin.  If could only play one
of those instruments for the rest of your life (a hard question, I
know), which one would win out?

Ahh — probably, the one you left out!  Piano!  I do have a very special
connection with the banjo (how could I not, as my grandfather and great-grandfather
both played?!), and I do most of my songwriting on guitar.  But piano is my
first love — it both challenges and inspires me the most.

Do you have any musical dreams that you’d love to experience?  Think big.

18 piece swing band, with full brass and string sections, and period costumes.
Guess I need to learn to play swing, first.  But I have my grandfather’s Vega
tenor banjo, and it would give me a great excuse to play it!!

Putnam Smith is opening for Slaid Cleaves at the me&thee in Marblehead, MA on Friday September 6.